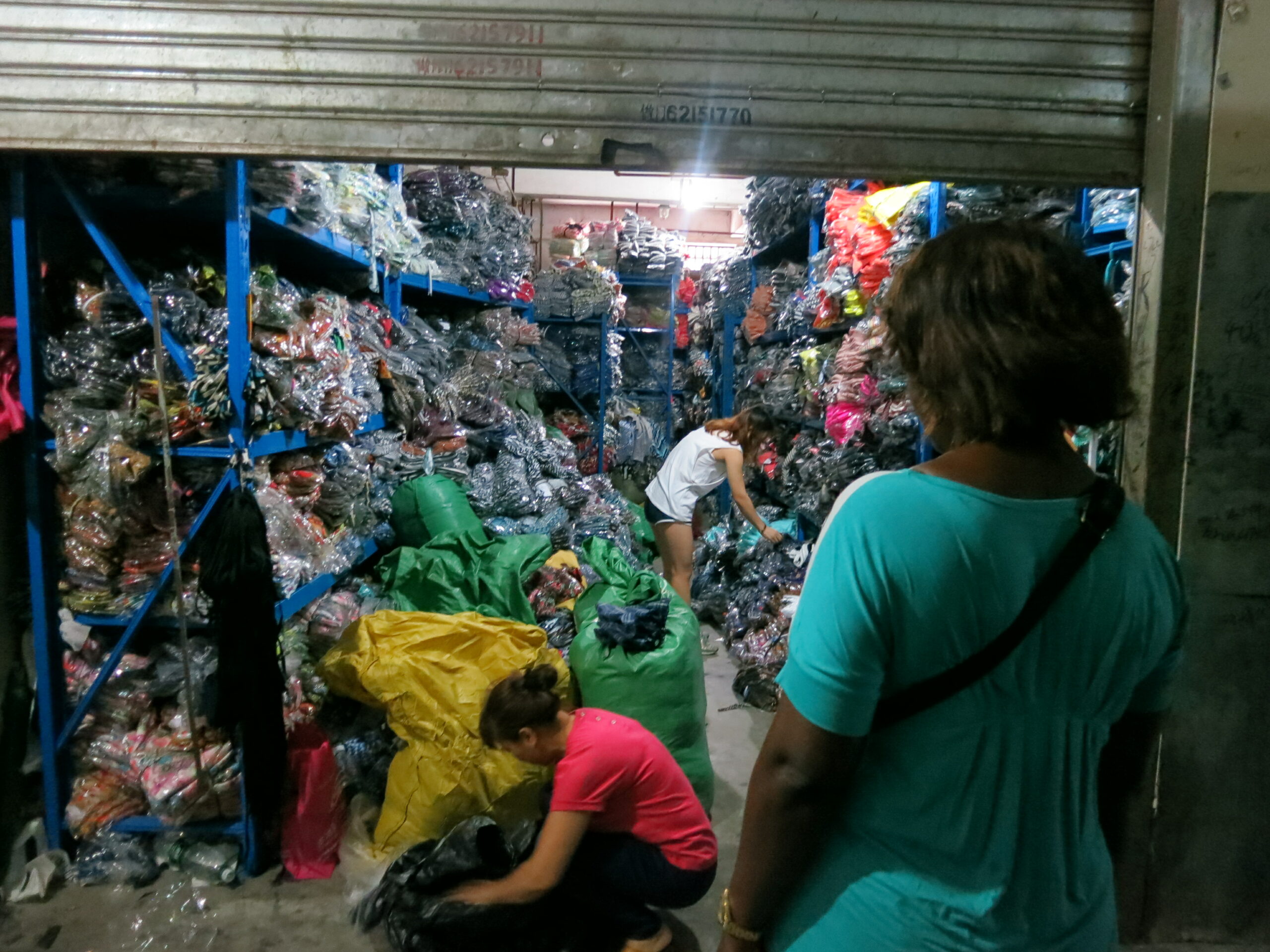 1-Can you tell us about yourself, Lesley Nicole Braun, your academic cursus, what drew you
to focus in your research on international migrants and Africans in particular?

In 2014 I received my PhD in Anthropology from the University of Montreal a francophone university in Montreal, Canada which is also the city of my birth. Since 2009, I have been carrying out research in Kinshasa, capital of the Democratic Republic of Congo. Currently I am a senior lecturer at the University of Basel in Switzerland. I am also a principal investigator on a research project funded by the Swiss National Science Foundation.

During my doctoral work, I was interested in women’s performance in Kinshasa and the ways that popular dance, in its embodied and symbolic forms, participates in the construction of an urban experience. I have a book coming out this year based on this research entitled, Congo’s Dancers: Women and Work in Kinshasa with the University of Wisconsin Press.

While I was living in Kinshasa, I befriended several women in my neighborhood who were involved in suitcase trade. My new research interests grew out of conversations with these women.

While West African women maintain long histories of trading in the region and abroad, Central African women—specifically in the Democratic Republic of Congo—have only recently embedded themselves in international trade circuits. Congolese women historically travelled to neighbouring countries like Togo and Angola, buying household wares and patterned cotton textiles called pagnes or wax. Imports from West African countries, manufactured in places such as China, were cheaper due to longer established trade networks connecting them to global wholesalers. Once direct flights were introduced connecting Kinshasa to Dubai and Turkey intrepid entrepreneurs cut out the West African middlemen and ventured independently in search of their own wholesaler connections. China became a popular destination in the mid-2000s because of accessible business visas, as well as direct flights to Guangzhou with generous baggage allowances. Turkish airlines has been particularly instrumental in facilitating trade between Africa and China as they offer affordable. direct flights several times a week from countries like Congo.

Most trade takes place abroad for two weeks at a time in cities such as Istanbul and Guangzhou and products range in variety. For instance, hair extensions, textiles and clothing, shoes, handbags, household appliances, home decorations, and construction material are the most common imports.

Some traders purchase wholesale goods to sell in their shops, but most sell informally, out of their homes, to their network of customers. That said, there are several categories of traders, and what they import reflects the amount of financial capital they have access to. For instance, one woman might be in the business of filling entire shipping containers with expensive furniture and construction material, while others pack large bags with affordably-priced sandals that they resell for a profit.

An example of the merchandize at a ‘home store’

Just as there are different scales of trading activities, like suitcase trade and filling 40-foot shipping containers, there are different women engaged in this business. Some women work as traders full time, and there are others who are employed as teachers or government clerks who earn extra income through transnational trade.

My work is premised on considering the lives of women involved in trade between the African continent and abroad to China and now Turkey. Some of the questions I am interested in related to how women navigate local importation practices that are shaped by local systems of patronage. I am also questioning how supply chains been disrupted due to the pandemic as well as the ways in which inflation is impacting sales. 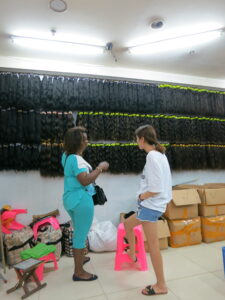 Hair extension sold in China. This Chinese sales person spoke Lingala, one of the DRC’s official languages.She learned from the traders who visit her shop.

2-In your research, you observe how working women pioneer transformations in their
community and in their country. Considering that in many parts of the world men seem to
have the center stage in commerce and business, what kind of difficulties or advantages do
you think Congolese women experience?

Women in Africa have historically been active in market trade—working in open marketplaces. The women who are considered to be leaders within markets in West Africa are referred to as “market queens”. Men and women have historically participated in trade in different capacities which have been shaped by different regional histories of precolonial trade, colonial interventions and national policies. In our contemporary moment, there are increased economic pressures bearing down on people, prompting more women get involved in trade to support their families.

Through their business, women are able to put their children through school, help financially an extended family network, as well as participate as active members in their communities, giving back through charities and so on. They also often mobilize to organize solidarity groups through which they can exchange advice and business tips.

Unlike other African cities such as Accra, Nairobi, or Lagos, Kinshasa has been slow to develop a significant economic middle class. Yet, a new urban economic group is emerging in Kinshasa, an African mega-city of nearly 12 million people, and trader women, are at the forefront of this socio-economic transformation. Congo’s trader women are at the forefront of creating new social classes, as well as household structures, and are therefore an important social group through which to examine the dynamics and relationship between what is locally called “informal” and “formal” modes of employment.

Since the pandemic hit, China has remained closed to anyone without a residence permit. African traders have consequently not been able to do business there. Though there are logistics agencies and middle men working in Southern China who facilitate the shipment of goods, many traders prefer to select goods themselves, to avoid potential problems with orders and shipping. Because of this many more African traders are now visiting Dubai and Istanbul for business (these cities were visited by traders even before the pandemic, but China was the most popular destination and considered to offer the most affordable products).

As a researcher, I have also pivoted my some of research to these cities, and am interested in the different trading practices associated with each of these three locations. In both Guangzhou and Istanbul, traders stay in affordable hotels that are located close to wholesale shops. Aksaray metro stop (proximity to Beyazit) though of course, traders travel to other locations throughout Istanbul and Turkey in search of products they can import to their home countries. While, there are a variety of African restaurants in the city, offering familiar foods, most traders also eat at local restaurants, discovering local cuisine. I found this to be true in both Turkey and China. In this regard, there is a cultural encounter that happens, and traders return home with new insights and experiences that they then share with their friends and families. Encounters are happening between local wholesale sellers and traders as well. As such these are important moments of exchange that can shape perceptions elsewhere. 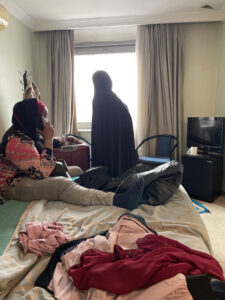 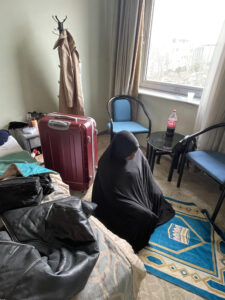 Relaxing and praying in a hotel room near Beyazit.

In both cases, traders are not interested in staying permanently in these cities. They are simply there for business. And because of the volume of traders who are circulating between these cities, they can be counted as contributing to local economies (for instance, in Guangzhou’s Xiaobei neighbourhood there are dozens of hotels set up to receive African traders). These hotels have since closed due to the pandemic.

There is much debate about quality and prices of products from China, Dubai and Turkey. China is widely considered to be the most affordable to buy goods of all kinds—there are many different quality categories available there. For instance, traders might have a customer base able to afford high quality leather goods, but others may require cheaper goods for customers with limited spending power. Further, China often allows traders to purchase single items rather than in bulk. Many Turkish wholesalers in contrast do not offer non-bulk sales and therefore become a deterrent for those traders who do not wish to buy large quantities of particular items. Further, many traders claim that Turkish textiles are more costly than those in China (this might have to do with quality).

Methods of communication are also a fascinating area of research as most traders and wholesale dealers speak to each other in very simple English as well as “calculator language”. There are many shop clerks who also quickly pick up a variety of languages depending on their clientele. For instance, I encountered many Chinese shopkeepers who spoke Lingala (a Congolese language). I also came across something similar in Istanbul—people working in wholesale markets develop a working competency in languages most frequently used by customers. Not to mention a familiarity between different cultural styles of business negotiation.

In both China and Turkey, I watched as relationships developed between sellers and their African clientele. Meals are shared and people get to know each other on a deeper level. 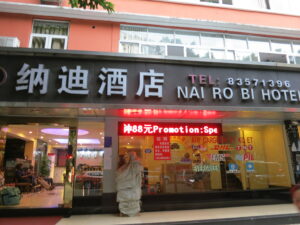 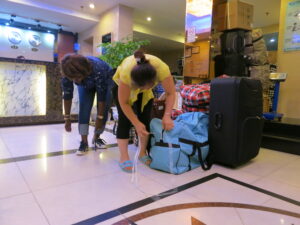 An example of a hotel where many African traders stay in Guangzhou, China. Often the hotel staff assists in preparing the cargo for either air travel.

4-During the pandemic e-commerce gained  momentum, but maybe it also had an
adverse effect on logistics in the commercial sector. Did logistical difficulties and increasing
costs affect Congolese businesswomen?

Throughout the pandemic, I kept in touch with trader women from Congo and Guinea on social media and with regular phone calls. I asked them if they continued to do business despite limited geographic mobility. Most women I spoke to continued to sell their old merchandise. There were a few women who made orders through agencies. Many shops in Turkey and China have begun to facilitate online sales, though ordering from Chinese wholesalers is more complicated from countries like Congo since many traders do not have bank accounts or WeChat (a Chinese application) accounts. Money is often transferred through a middleman agency that takes a cut from the transaction. What is more, many traders prefer to have a working relationship with a wholesaler before they commit to purchasing online. There is a lot of room for miscommunication when doing online shopping and many traders complain about having the wrong size, color, or different model shipped. And due to the cost of shipment, return is often impossible. In this regard, most traders prefer to be in full control and oversee the business in person.

There are elaborate chains of individuals involved in import export activities. From the airlines selling flights and baggage allowances to the individuals granting the travel visas, there is a whole network of people who stand to benefit from this transnational trade. Logistics and customs agents as well the hotels and restaurants that receive these entrepreneurs are also form part of this industry.

What has proven to be the real challenge with regards to the pandemic, is the inflated costs of shipping. Air cargo in March 2022 from Istanbul to Congo was between 12 and 15 USD per kilogram of merchandise, whereas last year the prices were around 9 USD per kilo. Further, prices of shipping containers have drastically risen—last year a 40-foot container going from Istanbul to West Africa cost around 3,000 USD whereas today it costs upwards of 10,000 USD. Despite this inflation, traders continue to come to Istanbul for business. It remains to be seen at which point the cost of travel and shipping will prove to be unsustainable for people. 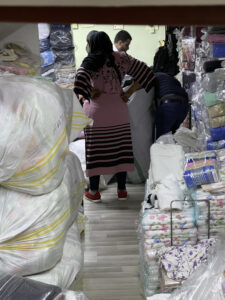