Growing up in a poor village in Burkina Faso, Diébédo Francis Kéré didn’t play soccer with the other boys. He helped fix houses.

After winning a scholarship to a vocational school for carpentry in Germany and attending architecture school at the Technical University of Berlin, Kéré didn’t rush to join a prestigious firm. As an architecture student, he had raised the money to build an elementary school in his hometown, Gando, with construction help from local residents, drawing blueprints for them in the sand.

And even after earning international acclaim at exhibitions like the Serpentine Pavilion in London and the Venice Biennale, Kéré has continually directed his attention toward home.

It is this devotion to lifting up the community he came from that has helped Kéré, 56, earn the Pritzker Prize, architecture’s highest honor, which was announced on Tuesday. “His buildings, for and with communities, are directly of those communities — in their making, their materials, their programs and their unique characters,” the jury said in its citation. “They are tied to the ground on which they sit and to the people who sit within them. They have presence without pretense and an impact shaped by grace.”

That work has taken the form of schools, libraries, health care centers and public spaces — often in underserved areas where Kéré makes the most of limited resources and draws on West African traditions. His projects have been concentrated in Africa, including Benin, Burkina Faso, Mali, Togo, Kenya, Mozambique and Sudan. In the absence of air-conditioning for his Gando Primary School (2001), Kéré used cement-fortified bricks and an elevated, overhanging roof to counteract conditions of extreme heat and poor lighting.

That project increased the school’s student body to 700 students from 120 and led to Kéré’s design for teachers’ housing (2004), an extension (2008) and a library (2019). Last year, T, Magazine named the primary school one of the 25 most significant buildings built after World War II.

Similarly, Kéré enlisted the cooling effects of quarry stone and stacked towers to minimize the air-conditioning needs of  Startup Lions Campus in Turkana, Kenya, an information and communication technologies complex completed in 2021. “Diébédo Francis Kéré is pioneering architecture — sustainable to the earth and its inhabitants — in lands of extreme scarcity,” Tom Pritzker, chairman of the Hyatt Foundation, which sponsors the award, said in a statement. “He is equally architect and servant, improving upon the lives and experiences of countless citizens in a region of the world that is at times forgotten.”

When it comes to materials, Kéré works with what’s available, whether that be wood, bricks or clay. “I will push for simplicity, for modularity,” he said. “I am trying to be as efficient as possible, to build little things that can be easily put together and create something holistic.”

“I love wood — it’s calming,” he added. “All this material is grounding you.”

Growing up in Burkina Faso, where his parents were farmers, Kéré said the hot classrooms made him want to learn carpentry and be able to one day build better buildings.

While studying in Germany, Kéré delivered newspapers at night to be able to send money back home.

“I used my time to travel around Berlin to see how buildings were done in the preindustrial time,” Kéré said, “because this is the technique that would help my people.”

While still a student, Kéré in 1998 established the Kere Foundation, a nonprofit that serves Gando’s residents through project development, partnerships and fund-raising.

In 2005, he founded Kéré Architecture in Berlin. His practice, which has grown to 21 people, is currently based in Munich. Significant works also include his Xylem pavilion at Tippet Rise Art Center in Montana (2019); the National Park of Mali (2010); and, in Burkina Faso, the Léo Doctors’ Housing (2019) and Opera Village (Phase I, 2010). “He works in marginalized countries laden with constraints and adversity, where architecture and infrastructure are absent,” the Pritzker said in its press materials. “The expression of his works exceeds the value of a building itself.” ​​

Kéré said he approaches each project from the perspective of his clients, attempting to understand their goals and needs. “I start to say, ‘OK, what do I have to give? Why does this person come to me?’” Kéré said. “I’m taking time to listen. I’m listening to really see what has pushed this person to come to me when the world is full of architects.”

Working in West Africa can present significant challenges. The National Assembly of Burkina Faso, for which Kéré designed a pyramidal building with exhibition spaces and courtyards, has been stalled because of political uncertainty.

Working in impoverished areas demands skills beyond design, Kéré said, namely patience. “You have power shortages, you have the internet that is broken all the time — you have to be passionate and believe in the project,” he said. “I make sure I don’t get frustrated, to imagine doing architecture in a different way that is not very fast.”

Kéré’s projects are not only utilitarian; they can also have a whimsicality and a serenity. For Coachella’s California music festival in 2019, he enveloped 12 towers in colorful triangular screens. 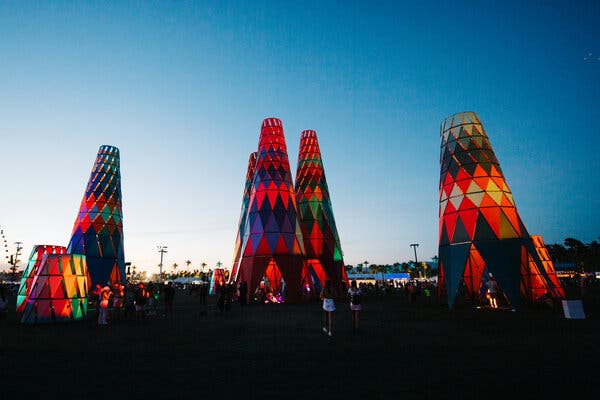 For his Benga Riverside School in Mozambique (2018) he patterned the walls with small recurring voids, “allowing light and transparency to evoke feelings of trust from its students,” the prize said.

The walls of his Center for Health and Social Welfare (2014) feature a pattern of framed windows at varying heights, offering picturesque views of the landscape “for everyone,” the Pritzker jury said, “from a standing doctor to a sitting visitor” to a patient lying down.

Kéré’s strong affinity for his native land informs his practice — he references local symbols like the baobab or palaver tree; a traditional blue boubou garment he wore as a child.

He not only wants the community to participate in the creation of architecture, Kéré said, but to connect with it and feel transported.

“They get more than a building,” Kéré added. “They get inspiration.”